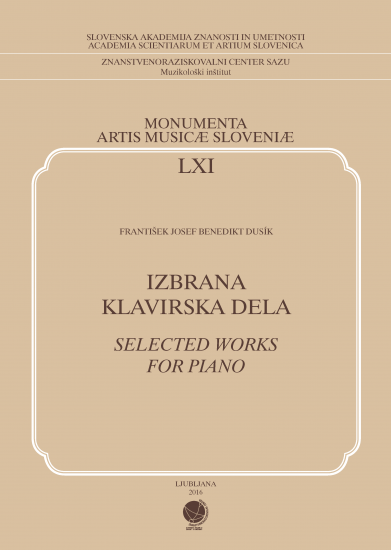 
František Josef Benedikt Dusík (1765–after November 1817) was born into a well-known Czech musical family. As a musician he constantly travelled with different theatre companies from town to town, foremost in northern Italy, but for a long period of his life he lived in Ljubljana, where he was employed at the cathedral and was active in the newly formed Philharmonic Society. He was very well informed about the contemporary trends in piano literature also through his brother, Jan Ladislav, who is considered one of the most renowned pianists of his time. Dusík’s piano music appears to be a unified narrative of clearly expressed themes, which are varied and transformed, harmonically changed, rhythmically and dynamically exercised, put into remote keys, decorated, chromatically brightened, and seasoned with virtuosity. In three sets of variations, a Capriccio and an older Sonata in G major, published in this volume, he already transforms the restrictive forms with cadenzas into free fantasy passages with expressive musical language that already predicts Romantic longing. This rich pianistic outpouring also bears witness to Dusík’s piano virtuosity and his creative sensitivity.

Erratum
On pp XX and XXI it is wrongly stated that a manuscript of the Sonata in G major, which is part of the Music Collection of the National and University Library in Ljubljana, stems from the archive of the Ljubljana Philharmonic Society.