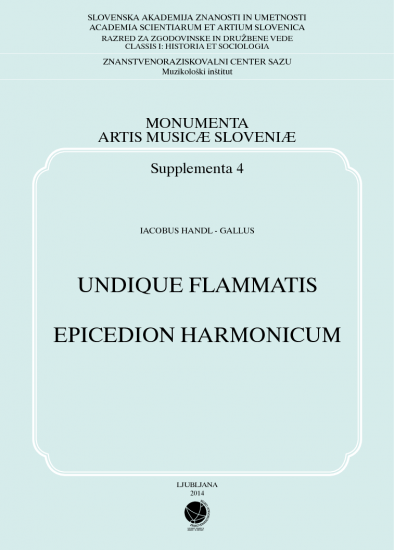 
The two compositions complement the complete works of Iacobus Handl-Gallus (1550–1591), indubitably the greatest Slovenian born renaissance composer. They are occasional pieces, both conceived in honour of important ecclesiastical personalities. Epicedion harmonicum is today known from a single incompletely preserved copy of the original print. Two out of eight voices are missing, however they were reconstructed for the present edition. Undique flammatis is a celebrated motet for seven voices. Although preserved only fragmentarily, it was possible to reconstruct it owing to the many copies of contrafactum Angeli laetantur de mirando (in which the original text was replaced by a new one). Undique flammatis also served as a model for his parody Mass with the same title. Due to their primary purpose both Epicedion harmonicum and Undique flammatis are prominent documents not only of the music history but are significant also for a wider cultural history.