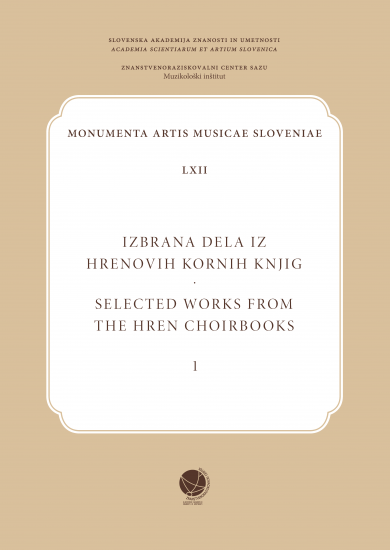 
The edition presents two double-choir Masses from the turn of the sixteenth century by two northern Italians active at the Inner-Austrian court in Graz: Annibale Perini and Pietro Antonio Bianco. Perini’s and Bianco’s Masses are of the parody or imitation type based on pre-existent multi-voiced compositions. The model for Perini’s Mass is Ruggiero Giovannelli’s motet Benedicite omnia opera Domini, while that for Bianco’s Mass is the motet Percussit Saul mille by Giovanni Croce. It seems highly likely that Missa Benedicite omnia opera Domini is a late work of Perini and could have been presented to Archduke Ferdinand II in 1596, while Bianco’s Missa Percussit Saul mille fairly certainly dates from 1601 and has been written as a commission for a solemn Mass celebrated before the Ferdinand’s departure for the battle of Kanisza. The sole sources of the two Masses contained in this edition are two large early seventeenth-century codices from a collection of six well-preserved choirbooks of Graz origin known as the Hren choirbooks. Today they form part of the Manuscript, Rare and Old Prints Collection at the National and University Library in Ljubljana (they are shelfmarked MSS 339–344). The source for the edition of Perini’s Mass is MS 340 and that for the edition of Bianco’s Mass is MS 341.