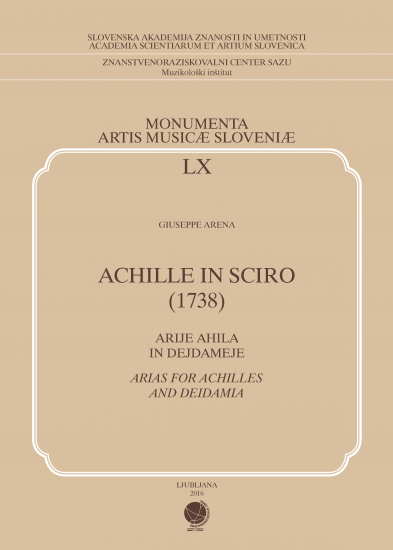 Achille in Sciro (1738). Arije Ahila in Dejdameje
Arias for Achilles and Deidamia


Out of all together ten soprano arias and one duet of the main characters in Giuseppe Arena's opera Achille in Sciro composed for the Roman Carnival season of 1738 all arias for Achilles, the duet and one aria for Deidamia were copied in Rome in early 1738 also for Count Ignaz von Attems from Graz, the founder of the Slovenska Bistrica branch of the mighty Styrian family of Attems. Five of these music manuscripts survived in Slovenska Bistrica castle though the ordeals of the World War II and are now kept in Maribor while others are recorded in the surviving list of arias belonging to his wife Josepha von Attems. The edition brings all of these arias, the ones from the Attems collection accompanied with a part for transverse flute, unique to this set of copies and attesting to local private music making in the eighteenth century.